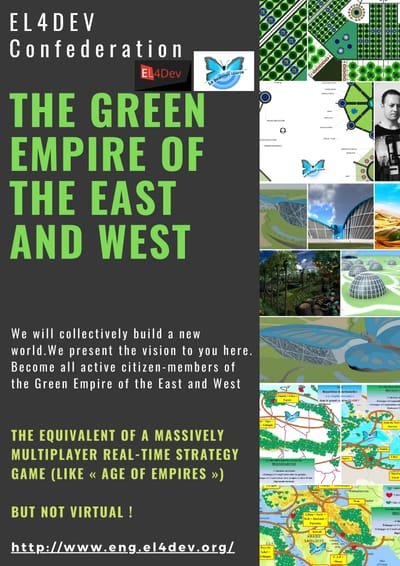 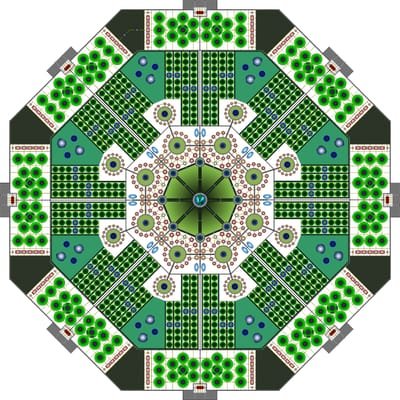 The Green Empire of the East and the West is Paul Elvere Valérien DELSART's societal vision.

It is a concept that takes the form of a live action role-playing game in alternate reality, a massively multi-player strategy game in which the delimitation between fiction and reality is particularly imperceptible or even non-existent.

The goal of the game is to collectively found a new, just and balanced civilization and to transform the earth into a non-hostile forest planet in which living things thrive. This goes through the launch and the realization of many pharaonic projects on the whole planet.

Each user then becomes a stakeholder in the construction of the future global civil society and in its self-regulation based on the universal principles of ethics.

This atypical game is highly experiential and culturally transformative because the actors act as reformers of all the structures and codes of society.

The Green Empire of the East and the West is a vast ecological and societal empire integrating all the nations of the East, West, North and South and unequaled in human history due to its atypical characteristics; a strongly prosperous empire over time; an empire in which all nations and territories are sovereign and self-sufficient.

It is a real confederation of individuals, resilient ecovillages, agricultural-climatic plant complexes, micronations and small towns (less than 3000 inhabitants)  located all over the world interacting in a decentralized manner through numerous cooperation agreements with a common goal.

Also called The EL4DEV Confederation, the Empire acts as a supranational ethical body, a sort of alternative United Nations. It presents itself as an innovative organizational structure, an international organization with the vocation of supporting all peoples and nations around the world.

Unlike a federation involving a central power, the confederation implies the sovereignty and the empowerment of all the territories, municipalities and peoples involved in the dynamic.

The Green Empire of the East and the West has its action plan : the participatory engineering program EL4DEV.
EL4DEV is at the same time a social, economic, cultural and political vision of emancipation and empowerment of peoples then a movement / mechanism which aims to unify them in a global community respectful of all life.

The Green Empire of the East and the West has its agricultural-climatic infrastructures : the educational tourist cities and eco-landscape complexes labeled LE PAPILLON SOURCE and their vertical plant structures transmitters of beneficial electromagnetic waves called The Green/Vegetal/Plant Calderas.

LE PAPILLON SOURCE designates various national constituencies made up either of a tourist mother city and several satellite eco-landscape complexes, all self-regulated and interconnected, or only of several satellite eco-landscape complexes. These places are sources of considerable income and places of gathering of skills which allow the Empire to set up and organize many societal projects. These infrastructures ensure the production of many foodstuffs. They play an important societal role at regional level, by distributing surpluses free of charge to non-profit organizations and to the most disadvantaged individuals. LE PAPILLON SOURCE is in short a participatory cross-national terraforming sub-program (process of transformation of the natural environment).

The Green Empire of the East and the West is the realization of several political-societal unions integrated by many peoples, municipalities and nations around the world.

Some of these political-societal unions are embodied in THE MUNICIPALITIES COUNTER-ATTACK sub-program, a transnational program of inter-municipal cooperation for the opening up and revitalization of isolated and destitute territories. Several municipalities (especially the smallest - less than 5,000 inhabitants) come together in Societal Economic Interest Groups in order to co-finance transnational decentralized cooperation events and innovative infrastructures labeled LE PAPILLON SOURCE.

Transnational events called "The Transnational Cooperation Initiatives (Intellectual and Artistic)" make up the decentralized cooperation mechanism within nations and between peoples of the world to build the foundations of the Green Empire of the East and West.

The Green Empire of the East and the West's network is woven through a new diplomatic model not centralized and no longer based on the "economy" factor but the "societal" factor : EL4DEV societal diplomacy.

It is built on a new cultural and philosophical movement leading to a social-organizational overhaul of global society: the EL4DEV 2nd Renaissance movement. The territories in which intellectual and artistic cooperation events begin are the centers of the movement.

The Green Empire of the East and the West is deeply network-based (networkcentrism). In this context, the EL4DEV Information System (set of interconnected web platforms) is the online self-learning tool through collective experience and channeling of actions carried out in the four corners of the world. It is also the interface for real-time measurement, monitoring and modeling of the territorial dynamics of progress created. A key element of this information system is called the EL4DEV Strategic Deployment Tool.

If you have always been fascinated by the founding processes of past empires be it the Roman Empire, the Ottoman Empire, the Russian Empire, the Mongol Empire, the Empire of Japan, the Chinese Dynasties, the French Empire or even the African empires here is the opportunity to join the game (which has nothing virtual).

The Green Empire of the East and the West is a rich universe on which will be based many works published by the EL4DEV program. These works are collections of short stories, novels, illustrated novels, graphic novels and other comics, counts, poems, essays, manifestos, collections of testimonies and biographies around the Empire thus including the EL4DEV program, LE PAPILLON SOURCE, THE MUNICIPALITIES COUNTER-ATTACK, the GREEN/VEGETAL/PLANT CALDERAS then the concepts of EL4DEV SOCIETAL DIPLOMACY and the EL4DEV Second Renaissance Movement. 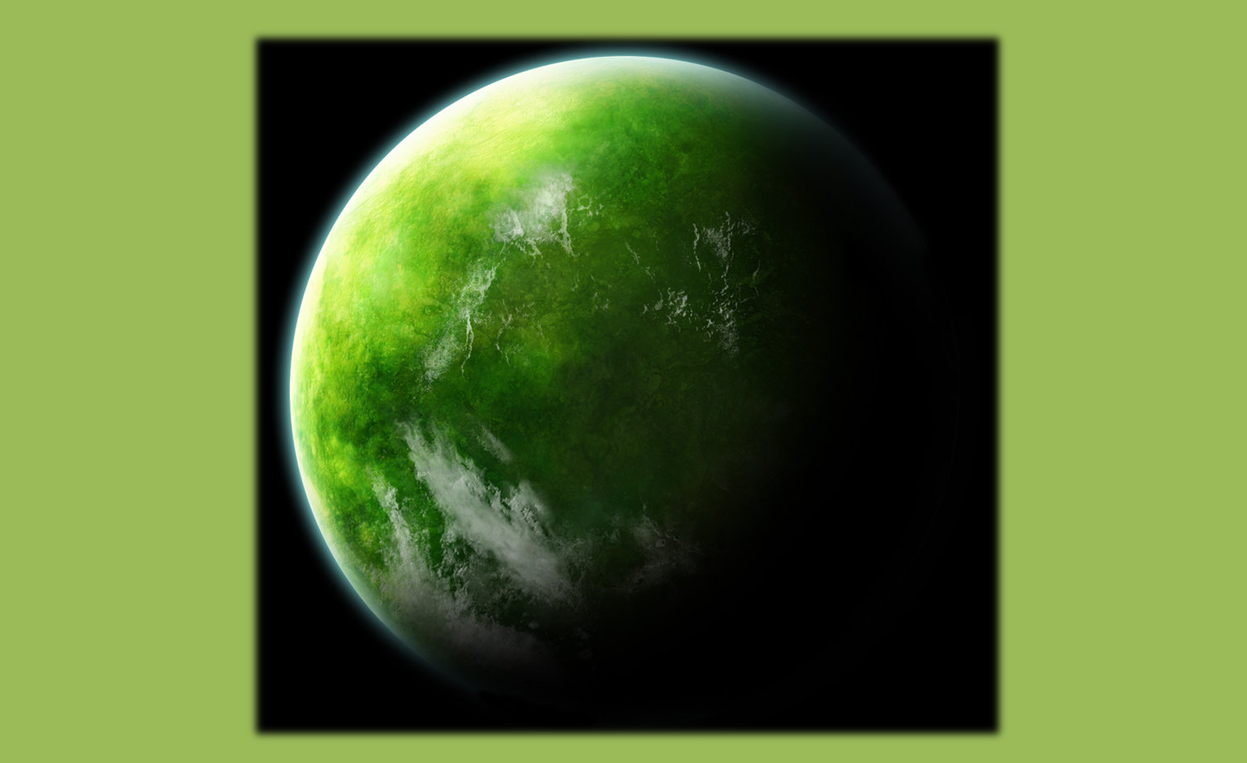 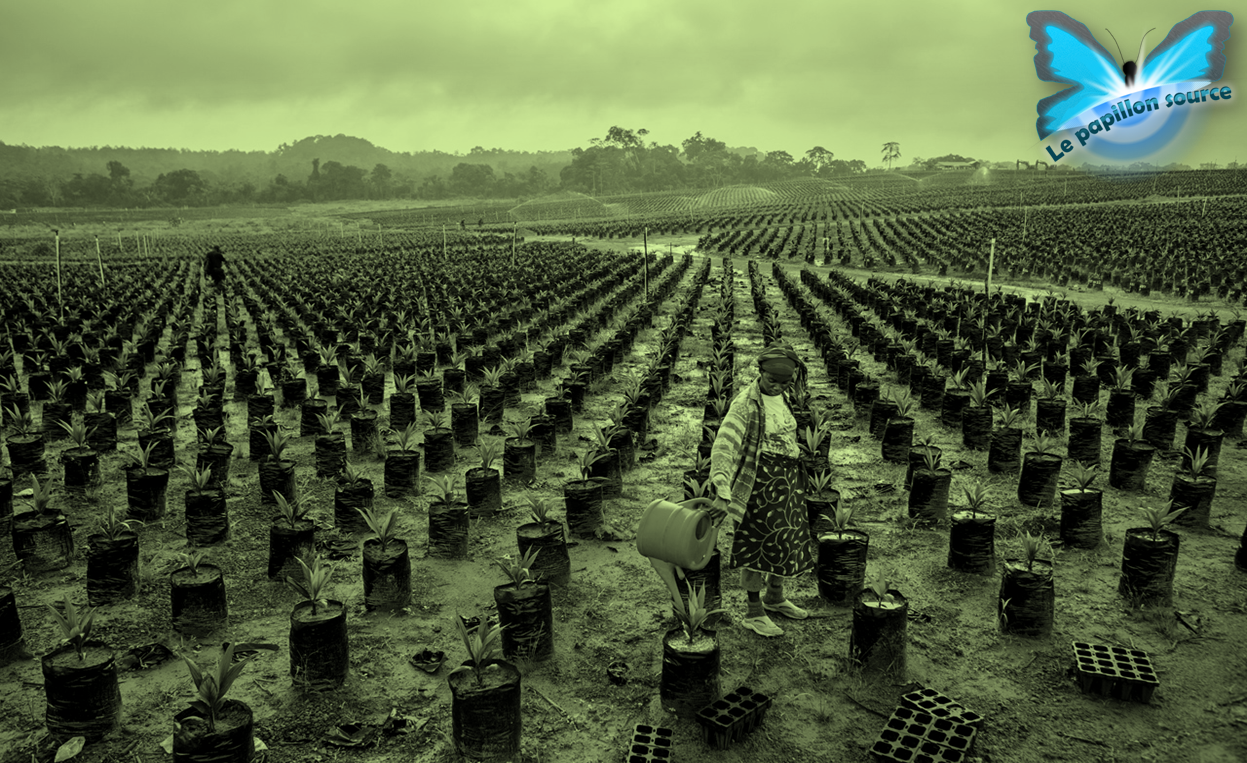 Official proclamation of the EL4DEV confederation / Green Empire of the East and the West (Eng)
http://www.eng.el4dev.org/

Soutenez-nous sur Patreon– We need sponsors, back us on Patreon:
https://www.patreon.com/LE_PAPILLON_SOURCE_EL4DEV